"We Could Be Free" by Vic Mensa, American rapper Vic Mensa, Call for Unity, Chicago/Illinois, drug addiction, Human Relationships, Police violence against blacks, The Autobiography as told by Vic Mensa

In keeping with my end-of-year tradition, I feature a song on my Poetry Corner December 2018. During this year of growing division in the USA, the hip hop song “We Could Be Free” by Vic Mensa captured my attention. It’s the thirteenth track on Mensa’s first, full-length, studio album, The Autobiography, released on July 28, 2017.

An American rapper, singer, and songwriter, Vic Mensa was born Victor Kwesi Mensah on June 6, 1993, in Chicago, Illinois. He grew up in the good part of the Hyde Park neighborhood within a sheltered home with two parents, both educators. His white American mother and Ghanaian father, an economics professor at the University of Chicago, wanted their son to go to college. But the young Vic dreamed of becoming a rock star.

With adolescence came exposure to the real world outside of Vic’s gated community. In “Memories on 47th Street,” the biracial Mensa raps of his loss of innocence and the beginning of his drug use.

At age 12 I learned the difference between white and black
Police pulled me off of my bike, I landed on my back
Back to reality, oops, a victim of gravity
Where they pull you down and keep you there
Dependin’ on how you keep your hair

“I started to realize that America and the world were categorizing me as being black and all the stigmas attached to that, which would take a lifetime to unpack,” Mensa says in an interview with the Chicago Tribune. 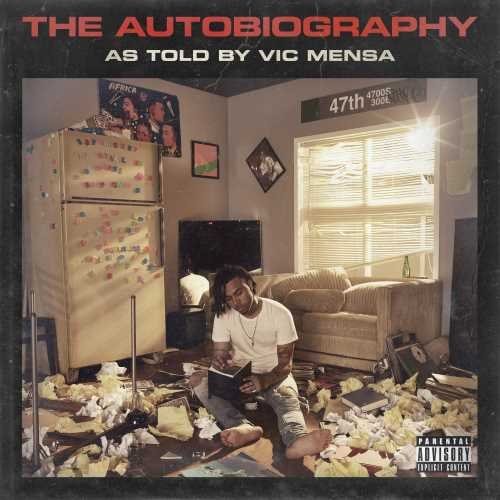 At sixteen years of age, Mensa and his jazz-musician, high school friends formed the indie-rock band, Kids These Days, achieving success on the local, open-mic circuit. After the group fell apart in 2013, Mensa rose to international fame as a solo rapper. But such early success led to what he calls a “vortex of abuse.”

In “Wings,” Mensa rages about his self-hatred, self-destructive behavior, and struggle to free himself from drug addiction.

I’d probably be a vegetable if not for medical attention
My self destructive habits have me itching like Tyrone Biggums
In the cyclone of my own addiction
The voices in my head keep talking, I don’t wanna listen
“You’ll never be good enough, nigga, you never was
Nobody fucking needs you, you should just jump off the bridge
You hurt everyone around you, you impossible to love
I don’t want you to live, I wish you were fucking dead
I wish you were never born, we would all be better for it
I don’t love you, I don’t like you…

When Billboard’s Megan Armstrong asked why he thought drugs were so prevalent as a coping mechanism, Mensa responded:

“Well, what other coping mechanism is presented to us? I have a lot of personal experience bouncing around between psychiatrists and therapists and being fed pills, while at the same time being told that if I don’t stop doing drugs, I’m gonna ruin my life. They act like what they’re giving us is not drugs. You can go into a psychiatrist sometimes and just feel that this person’s only role and their only desire is to write you a prescription, get a check and send you out the door.”

The featured song, “We Could Be Free,” reflects Mensa’s rebirth after years spent in Hell. The opening refrain sends a powerful message for love and unity during a period of growing division among Americans, one built on fear and hate of the other.

Refrain
We could be free
If we only knew we were slaves to the pains of each other
One thing I believe I can learn
To see my enemy as my brother
Then we could be free, truly
Then love could wash away all the sorrows
I’m not afraid to bleed
If it means, we’ll make a better today not tomorrow

When asked about the two opening verses (emphasis mine) during his radio interview on Breakfast Club Power, Mensa said:

“There’s a lot of people in pain and they’re dealing with it through opioids and other drugs. We’re also taking out our pain on other people. We’re being directed by the powers that be to look at our neighbors to the south, Mexico, across the ocean in the Middle East, and Muslims as the reason of our suffering. It’s a lie. I made that song to give a different vision for the future that’s not so hateful, because I feel that we’re so much more alike than we’re different…”

In the second stanza of “We Could Be Free,” Mensa questions the oppression of blacks in America that takes the lives of young black men.

I don’t wanna wait for the afterlife
I don’t wanna vigil by candle light
I don’t wanna be the new sacrifice
I don’t wanna turn into a poltergeist
Be a ghost at night full of broken dreams
Mama cryin’ at a open casket
Cold as ice in a suit, three piece
All dressed up for Sunday masses
Pastor say, “put faith in God”
But faith alone can’t make things right
Who the fuck is you to patronize
Somebody son who daddy died?
Why they flood Baton Rouge?
Why the city singing Alton’s blues?
Why, why, why, why?
[…]

Sometimes I wake up and I look up in the sky
Asking why I survived all the days that I could have died
Who am I in my place
To contemplate suicide?
In those times I try to remember

Only love [can] make my enemy my brother, Mensa reminds us in the closing verse.

To get there, we have to see beyond the lies that separate us. When that day comes, we will indeed be set free—freed from the capitalist system that enslaves humankind.

To read the complete lyrics of the featured song and learn more about Vic Mensa and his work, go to my Poetry Corner December 2018.

NOTE:
Excerpts from songs quoted are from Vic Mensa’s album, The Autobiography.