The fossil fuel divestment movement, now in more than 60 countries, is having exactly the impact we hoped it would. By acting together, we’ve made sure that not a week goes by without a university, local government, faith group, medical association, or heavyweight institution divesting from those companies that are driving the climate crisis.

When one’s day starts with news of terrorist attacks and more war, it’s good to receive unexpected news that makes one smile and warms the heart. I received such news recently from blogger, Dr. Gerald Stein, a retired psychotherapist in Chicago. His candid blog posts on our relationships are well articulated, insightful, and knitted together with engaging humor and honesty. In his latest post, he surprised me with the Very Inspiring Blogger Award.

After learning that I was working on a novel set in Guyana, a friend sent me the link to the Guyanese Online Blog as a source of information. The blog, published by Cyril Bryan, went far beyond a resource hub. It connected me with the Guyana Diaspora, strengthening my frayed link with my native land. What’s more, in reblogging my posts, Cyril Bryan has expanded my readership.

Bruce Witzel, a carpenter, lives on Vancouver Island, Canada. His self-constructed, off-grid home – powered by clean energy and integrated with a waste disposal system for maintaining a kitchen garden – gives me hope for our sustainable future. His down-to-earth spirituality expands my vision of life.

John Castellenas is a Vietnam veteran who found healing through poetry. The honesty of his prose and poetry touches my soul. His stories of saving himself from alienation and self-hate and finding love speak volumes to our nation engaged in never-ending wars.

Through blogging, I’m reminded that we all share the same humanity. 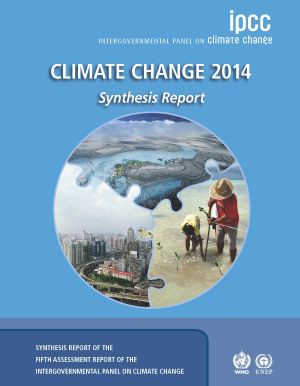 Observed changes in the climate system

“Warming of the climate system is unequivocal, and since the 1950s, many of the observed changes are unprecedented over decades to millennia. The atmosphere and ocean have warmed, the amounts of snow and ice have diminished, and sea level has risen.”

Global oil prices rise and fall for all kinds of reasons. Credit or blame for the current fall goes to increased shale oil production, led by the United States. Contrary to what one would imagine, for small developing nations like Guyana and other member states of the Caribbean Community (CARICOM) that depend on oil imports to fuel their economies, the current low price is cause for concern.

Guyana, together with nine other members of the Caribbean Community, buys oil from Venezuela, South America’s largest oil producer. Under the PetroCaribe preferential payment program, members pay from 40 to 60 percent of the invoice value in cash upfront. The balance can be converted to a 25-year loan with interest rates from 1 to 4 percent. END_OF_DOCUMENT_TOKEN_TO_BE_REPLACED 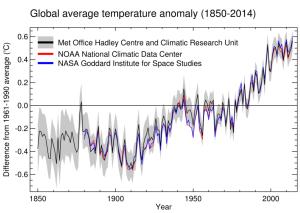 “Fourteen of the fifteen hottest years have all been this century. We expect global warming to continue, given that rising levels of greenhouse gases in the atmosphere and the increasing heat content of the oceans are committing us to a warmer future.” 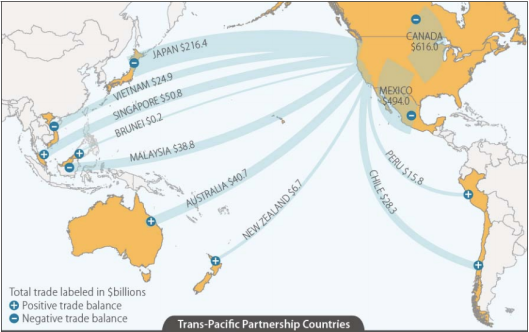 Map of Trans-Pacific Partnership Countries
Showing Total US Trade in Goods for each Country, 2013
Source: Federation of American Scientists

The Trans-Pacific Partnership (TPP), a proposed multilateral free trade agreement between the United States and eleven other countries in Asia and the Pacific, is currently nearing the final rounds of negotiation. Some members, like Canada and Japan, still have unresolved issues. Accounting for around forty percent of global GDP, the TPP is a Big Deal. Given the lack of exposure in the national media, American businesses and the general population don’t appear to be concerned about what could become the largest regional trade block on the planet.

During his recent testimony before the House and Senate committees, US Trade Representative Michael Froman reported that the TPP is nearing the finish line. “We are not done yet but I feel confident that we are making good progress and we can close out a positive package soon,” he told Senate Finance lawmakers. He urged them to push for Trade Promotion Authority (TPA), also known as fast-track.

Armed with fast-track power, the administration can negotiate trade and other policies tied to the agreement. Once done, Congress can approve or reject the terms of the agreement but cannot make a single amendment.

Last Thursday, in a speech to the Washington International Trade Association, Representative Paul Ryan, now chairman of the House Ways and Means Committee which oversees trade issues, defended the urgency for Congress to pass fast-track authority.

“Here’s the issue: When the U.S. sits down at the negotiating table, every country at that table has to be able to trust us,” he said. “They have to know that the deal the administration wants is the deal Congress wants—because if our trading partners don’t trust the administration—if they think it will make commitments that Congress will undo later—they won’t make concessions. Why run the risk for no reason?”

Most Republicans are in favor of signing the TPP and granting fast-track authority. Senator Elizabeth Warren and many other Democrats oppose the deal. In a letter dated December 17, 2014, to Ambassador Froman, Senators Warren, Tammy Baldwin, and Edward Markey expressed concern that the TPP “could make it harder for Congress and regulatory agencies to prevent future financial crises. With millions of families still struggling to recover from the last financial crisis and the Great Recession that followed, we cannot afford a trade deal that undermines the government’s ability to protect the American economy.”

As a former international trade professional, I support and continue to promote the movement of goods across borders. But, like NAFTA and other modern-day international trade agreements, the multilateral TPP agreement goes far beyond eliminating tariffs and other trade barriers, and setting quotas. The TPP will affect everything in our day to day lives: banking regulations, food safety standards, energy policies, medicine patents, environmental protections, government procurement, and much more.

Everyone deserves access to independent scientific information so they can make smart, informed decisions on issues that affect their health, safety, and environment.
~ Union of Concerned Scientists

Born in the Southern State of Santa Catarina, Cruz e Sousa was the son of freed slaves. (Not until 1888 was slavery totally abolished in Brazil.) When their former slave owners adopted and gave João da Cruz their surname Sousa, it became both a blessing and a curse for the child named after Saint John of the Cross.

After he revealed great intellectual aptitude, they enrolled ten-year-old João de Cruz in the Liceu Provincial where he spent the next five years studying French, English, Latin, Greek, mathematics, and the Natural Sciences.

Exposed to higher education and Brazilian white society, Cruz e Sousa assumed he could enjoy the same dignity and rights of whites. But late nineteenth century Brazilian society was not yet ready for the learned, talented, and multilingual black man who did not know his place. His bold and independent manner was viewed as arrogant. Judging from his poem, “Acrobata da Dor” (Acrobat of Pain), he hid his humiliation from those around him.

He guffaws, laughs, in a tormented laughter,
Like a clown, unhinged, nervous,
He laughs, in an absurd laughter, inflated
With an irony and a violent pain.

Fleeing racial prejudice in his home state, Cruz e Sousa moved to Rio de Janeiro where he worked as the archivist of Rio’s Central Railway Station. At twenty-six years old, already married and father of three, he struggled with financial problems and poor health.

In “O Assinalado” (The Branded), Cruz e Sousa laments his affliction and misfortune but observes that they provide food for the soul.

But this same shackle of affliction,
But this same extreme Misfortune
Makes your pleading soul grow
And blossom into stars of tenderness.

In adopting the new French Symbolist poetry of Charles Baudelaire (1821-1867) and others, Cruz e Sousa countered the Parnassian poetic style, the dominant style among leading Brazilian poets at that time. Among Brazil’s literary circle, some branded him the “Black Swan;” others the “Black Dante.”

Lack of recognition by his peers drove Cruz e Sousa to strive harder for perfection in his art. In “Alma Solitária” (Solitary Soul), he dispels his melancholy which he likened to an adolescent archangel forgotten in the Valley of Hope.

O Soul sweet and sad and pulsating!
What kitharas weep solitaries
Across distant Regions, visionaries
Of your Dream secret and fascinating!

His battle with tuberculosis took his last profound breath. He was only thirty-six.

You can learn more about Cruz e Sousa’s contribution to Brazil’s poetic tradition and read his poem, “Vida Obscura” (Obscure Life), in its original Portuguese and English versions at my Poetry Corner February 2015.