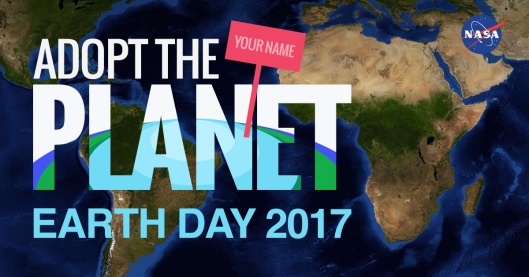 Saturday, April 22nd, is Earth Day 2017. The theme is: Environmental & Climate Science Literacy. The three-year campaign begins with a March for Science rally on the National Mall in Washington D.C. It will bring together scientists and supporters to demand that our leaders recognize the scientific truths across all disciplines, including climate change and other environmental issues.

“We need to build a global citizenry fluent in the concepts of climate change and aware of its unprecedented threat to our planet,” says Kathleen Rogers, President of Earth Day Network. “Environmental and climate literacy is the engine not only for creating green voters and advancing environmental and climate laws and policies but also for accelerating green technologies and jobs.”

Check out this video – “Undiscovered Guyana”

via Check out this video – “Undiscovered Guyana” — Guyanese Online

I am Mother.
Created by Father.
A complex scientific birthing process, they say.
I weighed over twenty-one thousand pounds at birth.
Father spared no expense;
he happily paid the $314 million.

I carried you for nine months
in the womb, my child.
I almost lost you, you know.
They closed the clinic
where I used to get healthcare.

I am Mother.
Created by Father.
My over-pressure waves obliterate
everything & everyone within a one-mile radius.
Look at me with awe & trepidation.
I am Death.

Where is Father?
I am cold & hungry, Mother.
He abandoned us, my child—
to pursue his dreams
of dominating the world.

I am Mother.
Created by Father.
He dropped me from the sky
to plummet to the earth.
My body detonated into gazillion atoms.
My soul became a black hole.

I am beautiful.
I am strong.
I am invincible.
Created in Father’s image.
I am Mother of All Bombs. END_OF_DOCUMENT_TOKEN_TO_BE_REPLACED

On Thursday night, April 3rd, our president unilaterally and without congressional approval launched 59 Tomahawk cruise missiles on a Syrian airbase, the alleged site of a chemical attack that targeted innocent civilians. The dust had not yet settled. No United Nations investigation of the heinous crime was conducted to determine the type of chemical weapons used and the perpetrators. But we – the defenders of democracy, peace, freedom, and humanitarianism – know, beyond all doubt, that Syria’s brutal dictator was responsible.

After killing innocent children and beautiful babies, Syrian President Bashar al-Assad had to be sent a strong message. Military power is strength. Money is no problem. END_OF_DOCUMENT_TOKEN_TO_BE_REPLACED

My Poetry Corner April 2017 features “Another Love Poem: Even in Hell” by American poet, Angela Consolo Mankiewicz (1944-2017). Born in Brooklyn, New York, she moved – against her will – with her parents to Los Angeles at the age of fourteen. But the gods had other plans for her. In 1968, her path crossed that of Richard Mankiewicz, twelve years older, and altered the course of her life.