Our choices and decisions go hand-in-hand. As adolescents, our parents, friends, teachers, coaches, favorite TV or film personality, and the individuals we connect most with all play important roles in the choices we make.  When we become adults, our goals and priorities can supersede all other considerations when making our choices.

In my article, “Teaching in a Remote Forest Region in Guyana” (posted on November 13), I shared my experience of my decision to teach in Mabaruma, a remote administrative township in Guyana’s northwestern rainforest region. That year, while the jungle closed in around me and news of my words and actions travelled by word-of-mouth along the arteries and veins of its river system, over one thousand American settlers faced their own entrapment just fifteen miles away, as the bird flies, across the jungle canopy.

The Peoples Temple Agricultural Project – Jonestown – was the haven of the American Church’s founder and leader, the Reverend Jim Jones. Pressures from defectors of the Church and concerned relatives in California forced Jim Jones to make desperate choices. He prepared his followers for “revolutionary suicide.”

The adults and families that made the choice to become members of the Peoples Temple Church, then headquartered in California, did so with the sincere desire to make a positive change in their lives and to make a difference in their communities. Unknowingly, they had put their trust in a charismatic and megalomaniac who promoted himself as a Messiah.

Among the 916 victims of the Jonestown mass-murder-suicide were 276 children. The youngest children were the first to receive the cyanide-laced, grape-flavored Flavor Aid. Reverend Jim Jones knew that, once the children were dead, their parents would follow them to “the other side.”

As parents, we have the responsibility of making choices for the well-being and development of our young children. When parents make bad choices, their children also suffer the consequences. My sons, then two and four years old, had no say in the decision their father and I made to migrate to Brazil. When my marriage disintegrated in Brazil, four years later, my sons also shared the pain and loss resulting from their father’s choice to return to our homeland, Guyana.

We all make choices that set us on particular paths in our lives. We do not always make the right choices. When we err, we have three choices: go back to the last crossroad and choose another direction; continue on the same roadway; or turn at the crossroad ahead. Inaction is not a choice. It is denial, defeat, death of the soul.

The 276 American children that died in Jonestown had none of these choices. 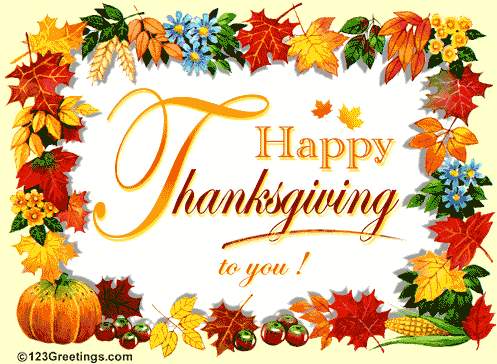 On Thursday, November 24, Americans will celebrate Thanksgiving Day. For many offices and businesses, it will be a four-day weekend holiday break. Celebrated yearly on the fourth Thursday of November, Thanksgiving Day is a special time of the year for families and friends to get together for a special meal and give thanks for the blessings in their lives.

After celebrating seven Thanksgiving meals since moving to California, I have observed that turkey with stuffing and gravy, cranberry sauce, and pumpkin pie are a must on this special day. I am not a great lover of turkey, but I am developing an appreciation for pumpkin pie. I remember, with thanks, last Thanksgiving when I shared the best pumpkin pie, so far, at the home of a writer friend.

When the United States was an agricultural-based society, Thanksgiving was a time for celebrating the end of the harvest season and of giving thanks for a good harvest. In our industrialized and technological world, we can measure our harvest by the returns from our businesses, factories, professional pursuits, and jobs.

During these times of job shortages and dwindling consumers for our products and professional services, the harvest is poor or lost for millions of families across the United States and many other countries across our planet. Without assistance, the homeless, jobless, and hungry among us will have no cause for celebration or for giving thanks this Thanksgiving.

I give thanks, this Thanksgiving, for the benefactors and charitable volunteer workers who provide assistance to our families in crisis.

I give thanks for the protestors of the OCCUPY Movement across our nation who are facing the cold, pepper spray, tear gar, police beatings, and arrest to clamor for an end to the growing inequality among us: the Top One Percent get richer while the remaining 99 Percent get poorer.

I give thanks for the people currently in my life, especially my two sons who make it possible for me to be a writer; for the people in journeys past who reached out a hand or changed the course of my life; and for the beauty and gifts of our planet.

If, this thanksgiving, your life is more like that of a person groping in the darkness along the edge of a precipice, know that help comes in unexpected ways from strangers who care. Give thanks for the miracles each day brings. You are not alone. 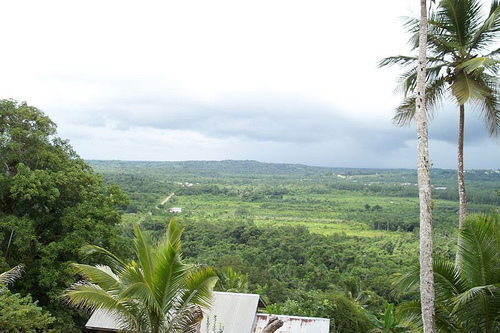 The year I graduated from the University of Guyana with a bachelor’s degree in geography, I volunteered to teach at the North West Secondary School in Mabaruma – the government administrative center in the region, near Guyana’s border with Venezuela.

The concrete school building stood on a ridge, overlooking the hospital and guest house. Large blackboards separated the classrooms. Seven teachers attended to a hundred students (11 to 18 years). The majority of students were indigenous Amerindians; the remainder Afro- and Indo-Guyanese. They came by corial (canoe) and on foot from the surrounding villages in the Barima-Waini River system.

On my first morning during assembly in front of the school building, I looked out beyond the township towards the forest-covered hills of mottled green. I was in unfamiliar territory. Later, standing in front of my class, I looked at their attentive faces, eager to learn, and knew that I had made the right decision to teach in Mabaruma.

Two months after my arrival, our Headmaster gathered the teaching staff together for a special meeting. That day my fate changed. Leaving Mabaruma the next day to take up a new post on the coast, he announced that I was to take over as Acting Headmistress until a new head was appointed by the Ministry of Education.

I objected. “The science teacher (a missionary worker ten years older than my 25 years) is the best qualified and the most experienced among us.”

“What about the agriculture teacher? The students like and respect him.”

The agriculture teacher shook his head. “You’re the best person for the job.”

The science teacher, together with the other teachers, remained silent.

My credentials – best geography graduate; recipient of the Chancellor’s Medal as second-best graduate – had impressed the Headmaster. But there are times when experience tops academic achievements.

The next day, with the secretary’s help, I took over the school’s administrative functions. I became the spokesperson for liaising with the government Education Officer, government personnel in the region who used the school for their meetings, and the Ministry of Education in the capital.

Following our first teachers’ meeting when the science teacher verbally attacked me, my life in the small and remote community became hell on earth. The newly-appointed Education Officer added wood to the fire with his sexual advances. When complaints to the Ministry about his conduct yielded no results, I requested a transfer to a school in Georgetown. The Ministry denied my request. I was trapped. With all schools owned and controlled by the government, my only option was to leave the teaching profession.

At the end of the school year, I left Mabaruma for Georgetown on my last flight on a twenty-seat Cessna aircraft.

Failure as a headmistress hung like an ugly bat in my closet. Years later, on separate occasions, I met the agriculture teacher and a parent (a government worker) of two of my former students in Mabaruma. The agriculture teacher told me that the two art students I had prepared for the London General Certificate of Examination (Ordinary Level) had passed the exam, thanks to my excellent preparation. It was their second attempt at the art exam. The parent thanked me for the joy I had given his eleven-year-old daughter who died from leukemia the year after I left.

Sometimes in life, it is only with time that we can better evaluate our successes and failures. 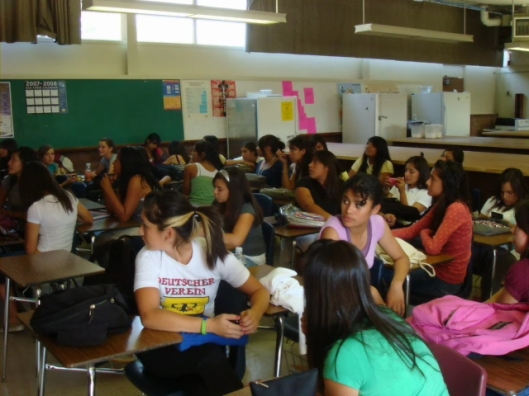 A nation without good public education, easily accessible to all of its citizens, is a nation built on sand. With the globalization of the world’s economy and technological advances in every professional field, our children have to compete with the best across the planet. Our high school curriculum must be geared to meeting existing as well as projected needs of our society. To successfully prepare our children to take their place in society, our teachers must have a sound knowledge base in their fields and continually upgrade their knowledge and skills. Teachers must have the support of the school administration and government educational authority in exercising their function. Classrooms must be equipped for and conducive to learning and study.

For seven years as a young woman, I served my native land – the young independent nation of Guyana – as a high school geography and art teacher. My role as a teacher went way beyond imparting knowledge and working towards high grades. Our children would much rather do something else than sit around in a classroom. As a high school teacher, I had the task of motivating and engaging my students (from 11 to 18 years) in the learning process; creating interest in the material taught and making it relevant to their lives; stimulating critical thinking and analytical skills; and developing their potential as individuals with unique talents and skills.

I could not be a school teacher today. During my four-year working experience in a retail store in Los Angeles, I witnessed on several occasions the difficulties young parents face in controlling their kids. On one occasion, I was horrified (culture shock?) by a parent’s reaction when I told her eight-year-old to stop removing the price labels from the product display. Before stopping her child, she glared at me with a look that said: Who are you to discipline my child? Left unchecked, this lack or absence of discipline only worsens over time.

Teachers are not miracle workers. When discipline is lapse or non-existent in the school or classroom, teachers cannot perform their duties. Moreover, without the input and participation of parents or guardians in the learning process, the lazy, disinterested, underachiever or disruptive student will be left behind. With adolescents now wired to portable electronic devices, our teachers also face new challenges in engaging students in the learning process. To evaluate a teacher’s performance solely on the grades of his or her students can be likened to preparing baked turkey for our Thanksgiving lunch without an oven.

When teachers and parents cannot work together to prepare our children to take their place in the world, our children are ill-equipped for adult life; our businesses and industries cannot find qualified workers and professionals; and our nation slips behind.

Our dedicated high school teachers are not mere data entry professionals who input data into our children’s brain cells. As we prepare for Thanksgiving Day on November 24, let us give thanks for the teachers who have changed the course of our lives.