During the past week, the Office of the United States Trade Representative (USTR) initiated events that will impact our trade relations with our top three trading partners—China, Canada, and Mexico.

On August 16th, USTR Robert Lighthizer opened the First Round of NAFTA Renegotiations with our Canadian and Mexican counterparts, a promise made by President Trump during his presidential campaign. In his Opening Statement, Ambassador Lighthizer noted:

This is a 23-year-old agreement and our economies are very different than they were in the 1990’s. We need to modernize or create provisions which protect digital trade and services trade, e-commerce, update customs procedures, protect intellectual property, improve energy provisions, enhance transparency rules, and promote science-based agricultural trade.

He pointed out that, while many Americans have benefited from NAFTA, “[w]e cannot ignore the huge trade deficits, the lost manufacturing jobs, the businesses that have closed or moved because of incentives — intended or not — in the current agreement.”

On Monday [08/14/17], President Trump instructed me to look into Chinese laws, policies, and practices which may be harming American intellectual property rights, innovation, or technology development.

As the captioned chart (prepared by Rosaliene Bacchus) of U.S. Total Imports & Exports of Goods & Services 2008-2016 indicates, the volume of US trade by value has been in slow decline since 2014. According to the U.S. Trade Report 2016, released in July 2017 by the United States International Trade Commission (USITC), America’s economic growth, like that of the global economy, slowed in 2016. U.S. real gross domestic product (GDP) increased 1.6 percent compared to a 2.6 increase in 2015. This deceleration of growth is largely reflected in a downturn in private domestic investment and slowing expenditures on personal consumption.

When compared to 2015, our total exports of goods valued at $1.4 trillion in 2016 fell 3.3 percent. Imports of goods amounting to $2.1 trillion fell 2.6 percent. Only the agricultural products sector performed well, with a trade surplus of $9.3 billion.

Here are the highlights of the top three performing sectors in U.S. trade in 2016 (with percent of total trade):

While it is still early to determine how much the Trump presidency has affected trade returns, a comparison of U.S. International Trade in Goods & Services over the period January to June 2015-2017, provided by the United States Census Bureau of the U.S. Department of Commerce, reveals a recovery in both exports and imports as shown in the chart below (prepared by Rosaliene Bacchus). 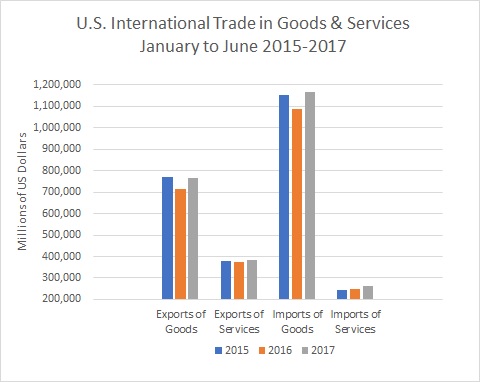 The following chart (prepared by Rosaliene Bacchus) provides a closer look at the trade figures over the same period for our top three single-country partners – China, Canada, and Mexico.

Time will tell if our current trade war with our major trading partners will have the desired effect of bringing manufacturing jobs back to America and reducing our international trade deficit.