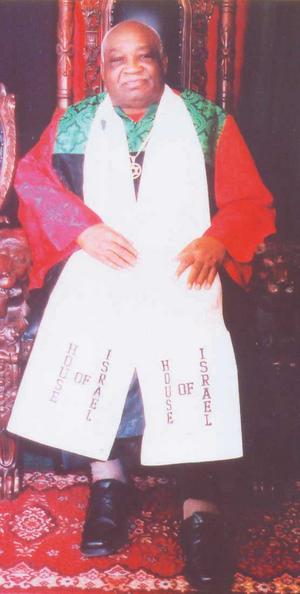 Thirty-four years after Walter Rodney’s assassination, the Walter Rodney Commission of Inquiry held its first session on 28 April 2014 at the Guyana Supreme Court Law Library. Comprised of a three-member team of top Caribbean attorneys from Barbados, Jamaica, and Trinidad & Tobago, the Commission’s task is to examine the facts and circumstances surrounding Dr. Rodney’s assassination. Of special interest is the perpetrator, the late Guyana Defense Force Sergeant Gregory Smith who supplied the bomb-rigged walkie-talkie that killed Dr. Rodney. Who was behind Smith’s actions? Who helped him to escape to French Guiana?

Karen de Souza, a member of the Working People’s Alliance, the party Walter Rodney co-founded in the 1970s, confirmed Edward’s testimony of the House of Israel’s allegiance to the PNC government and their role as political thugs for subduing the government’s political opponents and breaking up political meetings. (Caribbean Life News)

The House of Israel holds no ties with Israel or traditional Jewish religion. The cult was established by David Hill, an American Black Power fugitive who arrived in Guyana in January 1972. Using the alias Rabbi Edward Washington and claiming to be the Prophet Elijah, the religious leader attracted mainly poor and uneducated Afro-Guyanese. He preached that Jesus was a black man and that Africans were the only true Jews.

Forging ties with Afro-Guyanese President Forbes Burnham, Rabbi Washington propagated his racist message on the state-owned radio station. As the cult grew, claiming a membership of 8,000, they became tools of the oppressive PNC government. As Edward Rodney testified, a special cell worked in conjunction with the Guyana Defense Force. (Guyana Times)

After Burnham’s death in 1985, Rabbi Washington and his House of Israel no longer enjoyed impunity under the new PNC President. In July 1986, the Rabbi and three cult leaders were arrested and charged with a nine-year-old, in-house murder. Before completing his sentence, the Rabbi was released in August 1992 by the newly elected Indo-Guyanese government. The Rabbi left for New York, but, fearful of arrest in the United States, he returned to Guyana. Thereafter, he kept out of Guyana’s politics.

In 1997, the American Black Power activist, turned religious leader, returned to the United States. Eight years later, he died in New Jersey at the age of seventy-seven.

During an interview (1985-1986) with Fr. Andrew Morrison, S.J., then editor of the opposition newspaper, Catholic Standard, the fallen Rabbi confided about holding incriminating audio tapes and photographs of the “dirty work” he had done for the PNC government. [1] If such evidence does exist, will the Walter Rodney Commission of Inquiry bring it to the light?

Dear Reader, my debut novel, Under the Tamarind Tree, is now available at Rosaliene’s Store on Lulu.com and other book retailers at Amazon, BAM! Book-A-Million, Barnes and Noble, Book Depository, and Indie Bound.

Learn more about Under the Tamarind Tree at Rosaliene’s writer’s website.

15 thoughts on “Guyana: Rabbi Washington & The House of Israel”