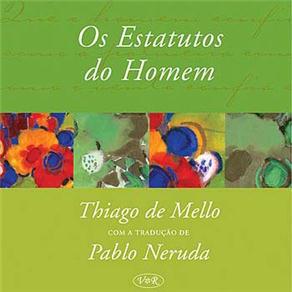 My Poetry Corner March 2017 features the poem “The Statutes of Man” (Os Estatutos do Homem) by Brazilian poet Thiago de Mello, born in 1926 in the State of Amazonas of Northern Brazil.

Growing up among Brazil’s exploited working class, Thiago de Mello devoted his poetry to addressing freedom, human dignity, and other social causes. When the military coup occurred in Brazil in 1964, he was the Cultural Attaché at the Brazilian Embassy in Santiago, Chile (1961-1964), where he became close friends with Pablo Neruda. He responded to the junta’s repressive, extra-constitutional decrees with his most famous poem, “The Statutes of Man.”

After resigning his overseas post and returning to Brazil, he was exiled in 1968 for denouncing the oppressive military dictatorship government (1964-1985). During his nine years in exile, he lived in Chile, Argentina, Portugal, France, and Germany. END_OF_DOCUMENT_TOKEN_TO_BE_REPLACED