On June 15, 2017, Guyana tied the knot with ExxonMobil with the signing of a production license for the extraction of oil and natural gas, located offshore the Caribbean/South American nation with a population of 800,000 people. With this license, together with the Environmental Permit granted on June 1st, ExxonMobil will proceed with the Liza Phase 1 development. Located 120 miles offshore in an area known as the Stabroek Block, the Liza field development includes a subsea production system and a floating production, storage and offloading (FPSO) vessel designed to produce up to 120,000 barrels of oil per day. Exxon and its partners plan to begin production by 2020.

ExxonMobil’s press release on June 16th states: “Phase 1 is expected to cost just over $4.4 billion, which includes a lease capitalization cost of approximately $1.2 billion for the FPSO facility, and will develop approximately 450 million barrels of oil.

It is a marriage of unequal partners. ExxonMobil’s profit margin in 2016 is more than twice that of Guyana’s GDP of US$3.5 billion for the same year. With the assistance of local and foreign experts in the industry, the Guyana government has reviewed the Production Sharing Agreement (PSA), signed in 1999 when exploration began under the former leftist Guyana government. END_OF_DOCUMENT_TOKEN_TO_BE_REPLACED

The campaign to hold Exxon accountable for their climate cover-up just took a big step forward.

The Securities and Exchange Commission (SEC) announced on September 20, 2016, that they’re opening an investigation into whether Exxon has failed to account for the risk climate change and climate regulations could pose to their business model. 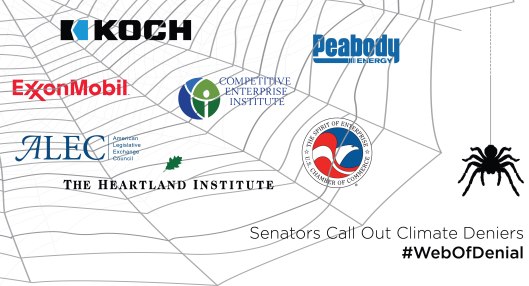 In spite of scientific consensus worldwide that we must transition to cleaner forms of energy and to keep fossil fuel reserves in the ground, ExxonMobil shows no sign of winding down its oil and gas explorations. In May 2015, they announced a significant oil discovery in the Stabroek (Guyana) block about 120 miles (193 kms) offshore. What elation for the newly-elected Guyana government! For a poor developing country, the prospect of oil riches seems a lifeline.

This month, the great news circulated across the fossil fuel industry. “The United States Geological Survey ranks Guyana-Suriname as the world’s second-most prospective, underexplored offshore basin, with an estimated 13.6 Bbbl of oil and 32 tcf of natural gas yet to be discovered,” declared the Offshore Magazine on July 7, 2016.

The article further stated that: “ExxonMobil is reportedly moving Liza [exploration well on the Stabroek block] into the pre-front-end engineering and design phase. Despite low oil prices, analysts such as Douglas-Westwood agree a fasttrack development, while capital-intensive, could provide large potential returns on investment.”

Other players have also gotten on board. In January 2016, Guyana’s Minister of Natural Resources signed a petroleum prospecting license and production-sharing agreement with the joint-venture team of Tullow Guyana BV (UK) and Eco (Atlantic) Guyana Inc. (Canada?) with 60% and 40% interest, respectively.

Commercial production is not expected to begin until another four years. That’s 2020. With continued record-breaking hot temperatures since 1880, Earth’s climate system already shows alarming changes. Rising sea levels, due to melting ice caps, is not good news for Guyana where the majority of the population lives along the low-lying coastal region. Will Guyana’s petrodollars come in time to relocate its capital and build a new port for the oil tankers?

While Guyana plans for its oil-rich future, ExxonMobil continues to fund climate science denial. Although they knew decades ago that carbon dioxide emissions from the use of their products could result in dangerous climate change impacts, ExxonMobil chose to deceive their shareholders and oil-addicted consumers.

During their presentation before the U.S. Senate on July 11 and 12, nineteen Senators repudiated the ways America’s largest oil and gas multinational corporation and others in the fossil fuel industry “developed a sophisticated and deceitful campaign that funded think tanks and front groups, and paid public relations firms to deny, counter, and obfuscate peer-reviewed [climate science] research.”

The degree of deception demonstrates the industry’s lack of moral values. To endanger the lives of millions of people across our planet is a crime against humanity. Could it be that ExxonMobil and its facilitators have become victims of their own deception?

What about the people of Guyana? What environmental risks do they face in the not too distant future?

Last week, we were among a handful of organizations who received a letter signed by 13 members of Congress claiming that we may be violating Exxon’s right to free speech. They’re requesting that we divulge any communication we may have had with state officials and many private organizations with regard to looking into what Exxon knew about climate change and when. At face value this request is a threat to constitutional rights.

Source: Climate Action is Needed Whether Exxon Likes it or Not. 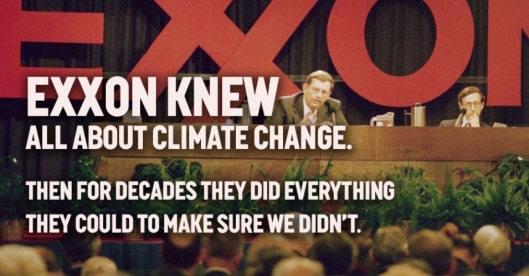 In a move many are hailing as a “turning point” in the climate fight, 20 state Attorneys General on Tuesday launched an unprecedented, multi-state effort to investigate and prosecute the “high-funded and morally vacant forces” that have stymied attempts to combat global warming—starting with holding ExxonMobil and other industry giants accountable for fraud and suppression of key climate science.

EXXON: The Road Not Taken

After eight months of investigation, InsideClimate News presents this multi-part history of Exxon’s engagement with the emerging science of climate change… It describes how Exxon conducted cutting-edge climate research decades ago and then, without revealing all that it had learned, worked at the forefront of climate denial, manufacturing doubt about the scientific consensus that its own scientists had confirmed.
~ EXXON: The Road Not Taken by Neela Banerjee, Lisa Song and David Hasemyer, InsideClimate News, September 21, 2015.