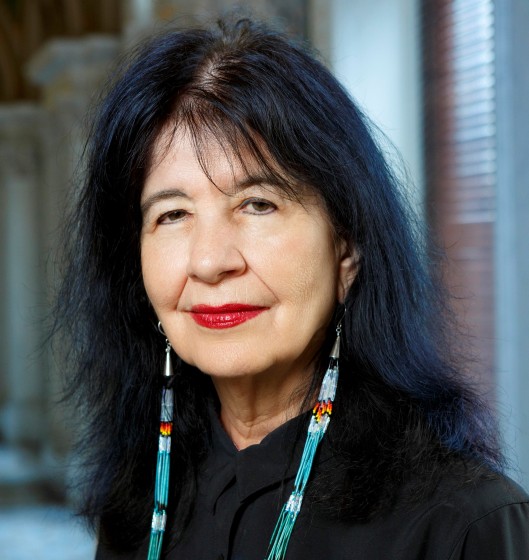 My Poetry Corner April 2020 features the poem “Advice for Countries, Advanced, Developing and Falling: A Call and Response” from the poetry collection An American Sunrise: Poems by Joy Harjo, Poet Laureate of the United States. (Note: The following excerpts of poems are all sourced from this collection.)

Born in 1951 in Tulsa, Oklahoma, the first of four siblings, Joy Harjo is a poet, musician, playwright, and author of the Muscogee (Creek) Nation. Her father was Muscogee (Creek) Nation and her mother of mixed ancestry of Cherokee, French, and Irish. Her mother exposed her to poetry at an early age, but painting was her first love.

My mother was a songwriter and singer, Harjo relates in her poem “Washing My Mother’s Body.” My mother’s gifts were trampled by economic necessity and emotional imprisonment. // My father was a dancer, a rhythm keeper. His ancestors were orators, painters, tribal chiefs, stomp dancers, preachers, and speakers… All his relatively short life he looked for a vision or song to counter the heartache of history. Her father’s drinking and abuse ended their marriage.

At sixteen years of age, Harjo’s abusive and violent stepfather kicked her out of their home. She moved to Santa Fe, New Mexico, where she received her high school education at the Institute of American Indian Arts. After graduation, she returned to Oklahoma, gave birth to a son, and returned to New Mexico to pursue a life as an artist. In 1973, as a second-year undergraduate at the University of New Mexico, she discovered poetry. After earning her BA in 1976, she moved to Iowa to obtain an MFA at the University of Iowa Writers’ Workshop.

“After all the abuse I had been through, I saw [poetry] as a way to transform what is harsh into something nourishing,” Harjo said, during an interview with Santa Barbara Poet Laureate Laure-Anne Bosselaar in January 2020. “I had found something in poetry not found in painting that was so compelling. I could write about Native women, fighting for our rights in over 500 tribal nations.”

Harjo’s short one-stanza poem, “Singing Everything,” resonates during these days of social distancing.

The earth is leaning sideways
And a song is emerging from the floods
And fires. Urgent tendrils lift toward the sun.
You must be friends with silence to hear.
The songs of the guardians of silence are the most powerful—
They are the most rare.

Thanks to the COVID-19 pandemic, silence has fallen over cities and towns under quarantine.

In the poem, “Honoring,” the Native American poet reminds us of honoring and thanking those who grow and pick our food, as well as those who make our clothes.

Who sings to the plants
That are grown for our plates?
Are they gathered lovingly
In aprons or arms?
[…]
Who stitched the seams in my clothes
One line after another?
Was the room sweaty and dark
With no hour to spare?

As a member of a tribal nation with ancestral roots tied to Mother Earth, Harjo calls attention to the loss of our trees, driven by money hunger [that] roam our minds. In “Let There Be No Regrets,” for Bears Ears National Monument, she writes:

To the destroyers, Earth is not a person. / They will want more until there is no more to steal. / Earth who does not know time is patient. / The destroyers will destroy themselves.

In the fifth of seven questions raised in her poem “For Those Who Would Govern,” the poet asks:

Do you follow sound principles? Look for fresh vision to lift all the inhabitants of the land, including animals, plants, elements, all who share this earth?

Harjo prays for America in “Bless This Land,” the final poem in her collection An American Sunrise: Poems (2019).

In the featured poem, “Advice for Countries, Advanced, Developing and Falling: A Call and Response,” our first Native American Poet Laureate examines seven aspects of nationhood: its nature, governance, power sharing, ownership, human laws, inclusiveness, and securing its future. What are we called to do? What is our actual response? (Note: The format differs from the original poem for space and clarity.)

Call: The ruler’s disposition and rules determine the state of being for all constituents.
Response: Each state governs itself without respect for individuals. It’s everyone for themselves.

Call: Power is dangerous when wielded in the hands of one. It is meant to be shared.
Response: I was given this position by cunning, by money, by sex, by family, by God. It belongs to me and no one else.

To read the complete featured poem and learn more about the work of the United States Poet Laureate Joy Harjo, go to my Poetry Corner April 2020.

50 thoughts on ““Advice for Countries, Advanced, Developing and Falling: A Call and Response” – Poem by U.S. Poet Laureate Joy Harjo”