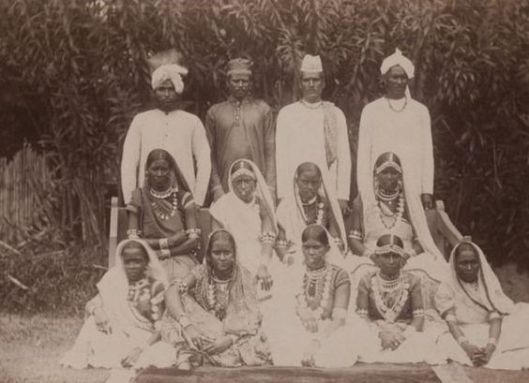 In commemoration of the centennial of the abolition of Indian Indentureship on March 12, 1917, my Poetry Corner May 2017 features the poem “Destination” by Janet Naidu, a Guyanese-born poet, writer, social activist, and life-skills coach. She migrated to Canada in 1975, at the age of twenty-two, where she obtained a BA in Political Science and Caribbean Studies from the University of Toronto and, later in life, an LLB from the University of London (UK).

With the abolition of slavery in 1834 and the end of the apprenticeship scheme in 1838, the mass exodus of ex-slaves from plantations across the British Empire created a dire need for a regular and reliable supply of labor. On May 5, 1838, the first group of about 400 Indian indentured laborers, on a five-year contract, arrived in British Guiana on the sailing ships, Whitby and Hesperus. By 1917, their numbers totaled over 238,000 Indians, comprising 42 percent of the colony’s population. Only 65,538 returned to India on terminating their contract. Janet Naidu’s grandparents from Tamil Nadu were among those who arrived on the SS Ganges on November 8, 1915. 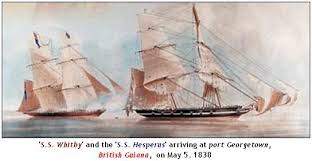 Born in the village of Covent Garden, East Bank Demerara, Naidu was the seventh of eight children. Like his parents, her father was a cane cutter. Her mother sold home-grown, green vegetables in the market.

In “Destination” from her poetry collection, Rainwater (2005), Naidu conjures the immigrants’ fearsome voyage across the ocean for an unknown destination.

Stanza 1
I taste creek water and hear the waves
murmur of beings in the distance.
They huddle in sleepless vessels,
trace bangles and foot-rings of another century
and make new charts
carving a space deeply rooted
the way lines map my palm.

Professional recruiters in India enticed their victims – landless villagers facing indebtedness, famine, joblessness, or some other plight – with promises of a better life.

Stanza 4
Even in his calm spirit of renewal
I see eyes in abandon,
the darkness of rain
and loneliness redden
the heat of untended wounds,
in the wreckage that ships cover.
Night marks the din and tumult
of the lower deck.

At the end of their voyage, the Indian indentured laborers found life on the sugar plantations tightly controlled, degrading, and exploitative. As the British historian, Hugh Tinker, observed: Indentureship was a “New System of Slavery.”

Stanza 7
Ponderous now. Will someone tell me
where the voyage ends? How will I know?
This new appendage begins
like weeds on the seashore.
We know the hardening would come
in a lurking storm ready
to withstand strikes in the fields.

On completion of their contracts, over seventy percent of the Indian indentured sugar workers exchanged their return passages to India for small plots of land, on which they planted rice and cash crops, and reared cattle. Through their arduous work and sacrifice, their descendants have become leaders in every profession and business enterprise.

Yet, the promise of a better life remains elusive for thousands of Indo-Guyanese who work on the sugar plantations in the fifty-one-year-old independent nation. With the continued decline of Guyana’s cane sugar on the global market, the government struggles with ways to revitalize the industry. As Naidu notes in Stanza 8: I see the old cutlass firmly planted / in this land, its sharpened edge / ready for new marks.

To arrive at our chosen destination involves taking risks and confronting the unknown. We cannot succumb to “the darkness of rain” and “the heat of untended wounds.” In the face of injustice and inequality, our voyage appears never-ending. Victories of yesteryear are overturned and must be fought for, again and again. With a “calm spirit of renewal,” we must chart our own course / in this bloody sea of revolution (Final Stanza).

As a descendant of African slaves and indentured laborers from Indian, China, and Portugal, I ponder with the poet. Is Los Angeles – a city of fake dreams, false promises, and fallen angels – my intended destination on this long and painful journey through life? At fifteen, when I decided to dedicate my life in the service of my God, Los Angeles, Brazil, marriage, and children never figured in my plans.

Life is filled with unexpected destinations. While they test our fiber and pull at our roots, they are doorways to greater understanding of our shared humanity.

To read the complete nine-stanza poem and learn more about Janet Naidu and her work, go to my Poetry Corner May 2017.