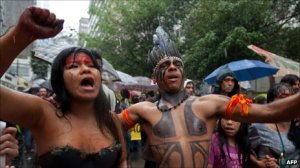 In the days of my youth in Guyana, a woman told me that we lived in a dress down world. It took me several more years to appreciate her vision of the world.

To understand the general usage of this Guyanese Creole expression, consider the following scene:

“Son, dress down a little lemme sit down,” the woman said to the young man sitting on the bench in the waiting room. Together with two girls sharing the bench, he moved down to make room for the woman.

Under dictatorship rule in Guyana, many of us had to dress down to give our jobs to relatives, friends, and enablers of those in power. In the United States, working people at all levels have had to dress down to hand-over their jobs to lower-paid workers in far-flung places across the globe.

Like the poor everywhere, the indigenous peoples in Brazil’s Amazon forest have never had a seat on the bench. Since the contract for the construction of the Belo Monte Hydro-electric Dam on the Xingu River – a tributary of the Amazon River – was signed in August 2010, the Amazon Indians along the Xingu River have been fighting a fierce battle to preserve their rivers, the jungle, and their way of life.

When completed, the dam will become the world’s third largest hydro-electric power producer. The Brazilian government expects to create thousands of jobs and provide electricity to 23 million homes. The estimated 40,000 inhabitants to be affected by the construction of the dam must dress down for economic progress. You can learn more about the Belo Monte Dam at http://amazonwatch.org/work/belo-monte-dam.

In the name of greater profits and economic progress, more and more people have lost their seat on the bench. Here in the USA, the American Dream is a faded dream for millions of Americans. Economic progress becomes an empty shell when millions of people must dress down and live on the fringes of society.

I leave you with the poem – This is the Dark Time My Love – by one of my favorite Guyanese poets, Martin Carter (1927-1997). Although written in the 1950s, during Guyana’s struggle for independence from Great Britain, it is still relevant to our present time of economic collapse.

THIS IS THE DARK TIME MY LOVE

All round the land brown beetles crawl about.

The shining sun is hidden in the sky.

It is the season of oppression, dark metal, and tears.

It is the festival of guns, the carnival of misery.

Everywhere the faces of men are strained and anxious.