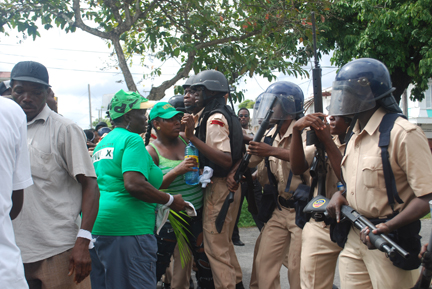 Excessive Use of Force by Police – Guyana

Guyanese continue to use violence to resolve persistent political, socio-economic conflicts facing our nation. Roman Catholic Bishop Francis Alleyne, in an opinion column published in Demerara Waves on 17 October 2012, wrote: “There has to be another way…to address honestly the sharp disagreements and roiling controversies that plague (the nation).” He called on all Guyanese to “share in the uplifting and the progress of this nation of ours…in a spirit of genuine commitment and steadfast dedication…”

The World Health Organization defines violence as “the intentional use of physical force or power, threatened or actual, against oneself, another person, or against a group or community, which either results in or has a high likelihood of resulting in injury, death, psychological harm, maldevelopment, or deprivation.”

I grew up and came to adulthood during a period of continual violence when, as a nation, we maimed and killed each other in our fight for independence from Great Britain and in the turbulent years following independence. We secured our homes from kick-down-the-door bandits with wrought iron grills and guard dogs. My psyche has especially been scarred by the rape of young girls and women in Wismar (May 1964); the burning of the home of the Abraham family, killing the father and seven of his nine children ages 6 to 19 (June 1964); the killing of Father Bernard Darke SJ (July 1979); and the assassination of Dr. Walter Rodney (June 1980). You, too, may have your own scars from violence propagated against you, your family or neighbors. Guyana’s rum culture – a legacy of our colonial past as sugar and rum producers – perpetuates the violence in our homes and beyond.

Somewhere along our journey in nation-building, we learned that violence is the best solution for resolving our differences. Violence begets fear. Fear begets control. Control begets power. Power begets omnipotence.  Omnipotence begets entitlement. The omnipotent plutocrat, oligarch or dictator lives in a bubble of his own creation. He loses sight of the real world and of his inherent frailties as a human being.

Instigated by excessive force and brutality of the police and hired thugs, collective violence for conflict resolution between factions of government destroys property; reduces production; hinders the movement of people and goods; disrupts business transactions; scares visitors, tourists, and investors; drives away local talent and skills; and deters involvement by qualified professionals in the Diaspora. Ultimately, violence adversely affects our economy and our place in the regional and world economies. Violence prevents us from moving forward.

I agree with Bishop Alleyne: “There has to be another way.”

In the case of the “roiling controversies that plague” Guyana, I believe that the ruling party must first look beyond the bubble and acknowledge that there is need for change. Only then can our government and its people work together towards bringing about change.