When my friend and poet, Angela Consolo Mankiewicz, told me that my second novel had to be about my life in the convent, I balked at the idea. To embark on a journey back to a time and place that caused me grief would require some meaningful purpose. The 2012 documentary film, Mea Maxima Culpa: Silence in the House of God, exploring the first known public protest against clerical sex abuse in the US, gave me the impetus I needed.

My convent novel, inspired by real events that took place in Guyana in the 1970s, had to be relevant to the present. To bash the nuns and priests would be unjust. Most religious men and women that I lived and worked with had devoted their lives to their God and strove to live according to His teachings. I have long forgiven those who had betrayed or abandoned me when I needed them most.

The plot unravels in the isolated rainforest of Guyana’s north west region, where the protagonist, Sister Barbara Lovell, seeks refuge from her groping white parish priest. It’s the period (1979-1980) of civil rebellion against the authoritarian government, culminating in the assassination of the opposition leader, Dr. Walter Rodney, on June 13, 1980. The police and armed forces, as well as the media (there was no TV at the time), are government controlled. Dissenting teachers are under attack. With a floundering economy, the government enforces austerity measures as dictated by the International Monetary Fund.

My greatest challenge was developing characters that were unrecognizable from the true-life individuals. In making the Guyanese-born Sister Barbara a dougla – a mixture of black (descendant of African slaves) and East Indian (descendant of indentured laborers from India) – I was not only able to distance myself during the writing process, but I could also create a different narrative from my own real-life experience.

Creating the white American antagonist, Sister Frances Adler, proved a formidable undertaking, requiring extensive research. To draw attention to our current endless wars, I interweave her life with the Vietnam War by making her younger brother a Vietnam veteran suffering from PTSD. Since the State of Ohio suffered the greatest casualties during that unholy war, I made her an Ohioan of German ancestry.

The British Father Geoffrey Goodman is one of two parish priests residing in the indigenous Amerindian village of Santa Cruz (fictitious name) where the convent is located. He is Sister Frances’ spiritual adviser and obsession. I found inspiration for developing his character in the Major Poems and Spiritual Writings of Gerard Manley Hopkins edited by Thornton and Varenne.

Sisters Barbara and Frances are both teachers at the secondary school located in Mabaruma Township, five miles distant from Santa Cruz, the government administrative center for the north west region, now known as the Barima-Waini Region. Most of the 120 students, ages twelve to eighteen, are Amerindians. Two students play important roles in the twisted circle of jealousy, betrayal, and deception. 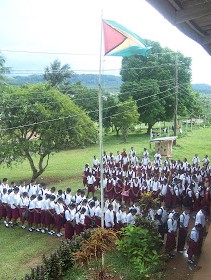 Leonard Gilbert is an eighteen-year-old, black, final-year student. With Sister Frances’ blessings, the rebellious adolescent becomes a protégé of Father Goodman. Sister Barbara suspects that Leonard, a member of the ruling party’s Young Socialist Movement, is a government informant.

Thirteen-year-old Raven Mendonza is the younger son of the local shaman, descendants of the Carib ‘warrior tribe’ that fought to the death against colonial invaders. A devious teenager with uncanny perception, he and Leonard have an ongoing feud.

I have now completed the third and final revision of my convent novel, The Twisted Circle. My friend Angela’s critical eye and insightful comments were invaluable in shaping the plot and characters. Retracing my faltering steps during a dark period of my life unlocked the human dynamics that had remained obscure and incomprehensible, until now. I thank Angela for that.

46 thoughts on “On the Making of My Convent Novel”