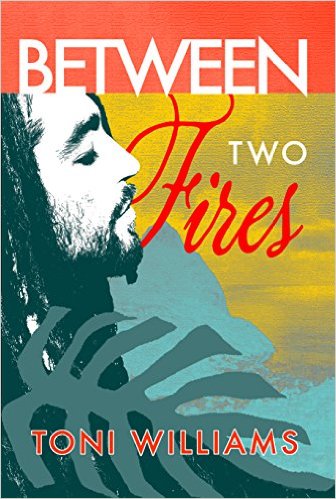 Between Two Fires by Caribbean author Toni Williams is the first book in his crime noir trilogy, Dread Desires. Williams takes us to the fictitious Elysian Island off the coast of Saint Lucia. Driven by desire for another man’s wife, Rudy Phillips, a struggling black British journalist, pursues her to their exclusive paradise.

Rudy is no stranger to the region. Born in Saint Lucia, he was nine when he migrated to England. Still single at thirty-four, he sports shoulder-length dreadlocks and a pencil mustache and beard. Oozing sexy charm, he’s a success with the ladies. No woman before has captured his mind, heart, and body like Bridget – the beautiful, white American wife of a British aristocrat, Lord Edward Henry Tennyson, thirty-two years her senior.

After meeting the couple in London during an assignment for a local tabloid, Rudy had a two-week-long liaison with Bridget. Believing that he could free Bridget from her unhappy marriage and claim her as his own, Rudy accepts her husband’s invitation to spend two months, all expenses paid, on Elysian Island.

Author Toni Williams is a master at submerging us into life on the privately-owned, three-square-mile island bought and developed by Edward. Among its residents are rich and famous Americans, European nobility, and upper-class Brits. In contrast to the affluence of “the fairy-tale land of ineffable beauty,” the village where the local workers live takes Rudy “back in time about a hundred years.”

Rudy soon realizes that Bridget isn’t the vulnerable and helpless type of woman he could control and dominate. A stockbroker by profession, she’s a highly successful entrepreneur with personal wealth. Her condescending treatment makes him feel like “some glorified poodle.” She placates him with affirmations of her love and tells him to trust her. She knows “what [they] must do in order to make things happen.”

Having agreed to ghostwrite Edward’s memoir, Rudy is frustrated in not getting face time with the sixty-seven-year-old, eccentric, and unpredictable aristocrat. To make matters worse, Edward’s announcement about writing his memoir has caused great consternation among some of the island’s privileged residents…including Bridget and her close American friends.

When an attractive, young, local woman is found brutally murdered, Rudy’s surreal lavish lifestyle is shattered. Framed for the murder, he sets out to find her killer to clear his innocence and salvage his image and reputation.

In Rudy’s quest to find the murderer, the author peels back Elysian’s veneer of beauty and respectability. The underbelly of the island paradise is laid bare: cyber-crime, drug trafficking, money laundering, and human trafficking for commercial sex and prostitution. The two worlds feed each other.

Williams captures all the nuances of navigating both worlds and the complexities of human interactions. People are not always what they appear to be. Financially independent women are not easily tamed. Entrapped by his desires like a crab in a crab-hunting bamboo trap, Rudy has a lot to learn about women and their wiles.

Born in Saint Lucia, Toni Williams has lived most of his life in the Caribbean. He’s a journalist and former newspaper editor, and a Reuters Fellow (Green Templeton College, Oxford University). Presently, he does mostly freelancing, including editing the St. Lucian lifestyle magazine, Dazzle. He’s finally pursing his lifelong dream to become a fiction author. His Caribbean Book Blog provides writers and readers with updates on new books and the latest developments in the global publishing industry.

2 thoughts on “Between Two Fires: A Novel by Toni Williams”