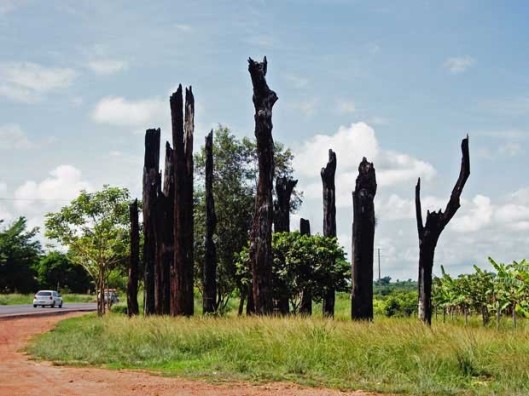 My Poetry Corner February 2016 features the poem “The Pedagogy of Steel” (A Pedagogia dos Aços) by Brazilian poet Pedro Tierra, pen name of Hamilton Pereira da Silva, a politician and Secretary of Culture in the Federal District.

Born in 1948 in Porto Nacional (Tocantins), Pedro Tierra abandoned his studies to join the resistance movement to overthrow the military dictatorship (1964-1985). In 1972, he was arrested and tortured for his subversive activities. During the five years he spent in prison, he lost several of his companions.

To survive and maintain his sanity, he began writing poetry. Adapting a Spanish pen name deterred exposure. He smuggled his poems to friends outside the prison, keeping them informed of life in captivity.

In 1977, Tierra’s collection of prison poems was secretly published in Italy under his pen name with the title, Poems of the People of the Night (Poemas do Povo da Noite). In his poem, “Prologue,” he pays homage to his companions who had died in prison or ‘disappeared.’

I am here to speak
through the mouth of my dead.
I am poet-witness
poet of the generation of dreamers
and blood
over the roads of my country.
We will survive.

After his release in 1977, Pedro Tierra dedicated his time to social causes. He was active in the foundation of rural workers unions across Brazil, the Workers’ Party (PT), the Workers Exclusive Center (CUT), and the Landless Rural Workers Movement (MST).

The featured poem, “The Pedagogy of Steel,” denounces the massacre of nineteen landless rural workers by the military police in Eldorado dos Carajás (Pará), on April 17, 1996: the fourth of similar massacres in the 1990s. Tierra not only recalls these four massacres, but also includes three earlier clashes (1893-1930). He makes clear that the struggle of small farmers and rural workers against large private landowners and giant agricultural corporations continues to be one of violent confrontation and exclusion.

Tierra’s use of the metaphor “steel” captures well this ongoing, relentless struggle. Forged in fire, steel is not only used in weaponry, but also reflects an emotional state. He expresses both connotations in the third stanza:

The pedagogy of steel
strikes down the body
this merciless geography…

Geography is the most comprehensive study of man and his environment. When that habitat becomes “merciless,” where does it leave man? As Tierra notes in his following stanza:

The plight of landless rural workers is not unique to Brazil. A front-runner American presidential candidate has used very derogatory words to criminalize undocumented, Mexican farm workers, eking out a living here in the United States.

Read the complete poem and learn more about Pedro Tierra and his work at my Poetry Corner February 2016.