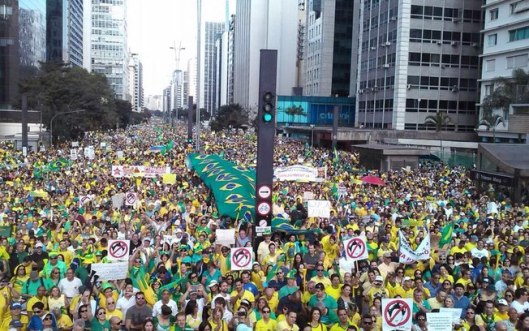 After leading Brazil’s economic boom under Former President Lula da Silva (2003-2010) and its record in reducing unemployment and poverty, the left-wing Workers’ Party (PT) government is facing a tough time. A weak global economy has taken its toll on South America’s largest economy. As has happened before during periods of recession, Brazil’s cost of living and job losses are on the rise again. This time, the implosion of the US$2 billion graft at oil giant, Petrobras, in March 2014, has weakened the nation’s economic foundations and moral fabric.

For the government opposition, conditions are ripe for bringing down President Dilma Rousseff and the Workers’ Party, in power since 2003. With the media giant, Grupo Globo, stoking the fires of discontent, and backed by the major conservative party (PSDB), an estimated 795,000 people from rising right-wing organizations and the middle class took to the streets for the third time this year on Sunday, August 16, in all major cities across the country.

Although President Dilma Rousseff is not implicated in the Petrobras corruption scandal, the protestors have blamed her for all of their woes, demanding her resignation or impeachment. Some protestors want a return of military rule as the means to ending corruption. Others want a return of the monarchy. Former President Lula da Silva, popular leader of the Workers’ Party, has also come under attack. Some protestors want him jailed for the Petrobras scandal. For the vocal opposition, Brazil’s left-wing Workers’ Party must be brought down by all means possible.

On Thursday, August 20, to counter the opposition’s demand for President Dilma’s impeachment, members of the left-wing parties, workers’ unions, social organizations, and landless peasants filled the streets in massive demonstrations nationwide, totaling an estimated 876,000 supporters. The largest turnout of about 60,000 people occurred in São Paulo, Brazil’s largest city. While affirming their support for the president, they criticized the government’s proposed austerity plan of cutting social programs.

Before becoming the first woman to occupy Brazil’s Seat of Government, Palácio do Planalto, Dilma Rousseff was the first woman to occupy other key political positions: Secretary of Finance of Porto Alegre, capital of Rio Grande do Sul; Secretary of Energy; Minister of Mines and Energy; and Chief of Staff under Former President Lula. Can the former Marxist guerilla against the military dictatorship (1964-1985) survive the turmoil?

Corruption is endemic in Brazilian society. No political party, government institution, state or local government can claim immunity. The impeachment of Former President Fernando Collor de Mello in 1992 for corruption failed to bring about the necessary reforms. Will the impeachment of President Dilma Rousseff be any different? I think not.