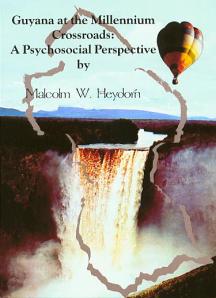 While researching for my novel set in Guyana during the period 1950-1970, I found the book, Guyana at the Millennium Crossroads: A Psychosocial Perspective by Malcolm W. Heydorn. More of a booklet in size and length, its layman language makes it an ideal social studies text book for Guyanese high school students.

Malcolm Heydorn’s book remains very relevant to Guyana today. As a Professor of Psychology and Gerontology in Ontario, Canada, the Guyana-born author shares his insights about the possible psychosocial bases for Guyana’s highly charged political and social circumstance. He calls attention to the urgency to change perspective for the overall social, economic, and political advancement of the nation (Preface, pp 6-7).

Applying analytical tools of a social scientist, Professor Heydorn examines the colonial past of Guyana’s five ethnic groups: Negro (used in a historical context), Indian, Portuguese, Chinese, and Amerindian (indigenous population). While he provides succinct snapshots of each ethnic group, I detect some bias when he notes that the Portuguese brought to the colony skills and invaluable experience in agriculture and other areas. The African slaves and Indian and Chinese indentured laborers receive no such recognition.

Over two hundred years of slavery plus four years of apprenticeship (1633-1838) and decades of indentureship (1838-1917) – with deliberate manipulation by the colonizers – led to ingrained ethnic stereotypes and prejudices. After defining the concepts of attitudes, stereotypes, and social prejudices, Professor Heydorn applies these concepts to the unfolding of Guyana’s brand of prejudice (Chapter 9). His uncensored presentation of the stereotypical disparaging attitudes towards each ethnic group may be offensive to some readers. As he demonstrates, these skewed perceptions of the other contrast greatly with the image individuals of a given ethnicity have of themselves.

Based on his psychosocial observation that Guyana’s ethnic populations have failed to reconcile their prejudicial postures over the last one and a half centuries (p. 78), Professor Heydorn presents his diagnosis. The Guyanese people suffers from “An absence of National Identity,” resulting in the country’s manifestation of social malaise and total disjointedness (pp 80-81). Dismantling this destructive system would be a formidable task requiring the involvement of all citizens. He proposes that leadership should come from the majority Indian population.

Treatment for healing the nation would require tenacity of purpose, the practice of civility, the capacity for tolerance, the rule of law, and the skillful application of the principles of attitude change (p. 87). The social scientist’s prognosis for failure to follow the prescribed treatment is grim. He warns that [u]nless Guyanese are prepared to emphasize the importance of these asset areas in their daily lives, Guyana is doomed to a replay of it’s turbulent past and present…, and would have only itself to blame. Worse still, it can become a nation divided in all respects, a fragmented territory (or territories), with no hope for a National Identity (p.94).

Can the ruling Indian party afford to ignore the possible prognosis for continued inaction in tackling the malady infecting the nation?

18 thoughts on “A Psychosocial Perspective of Guyana”