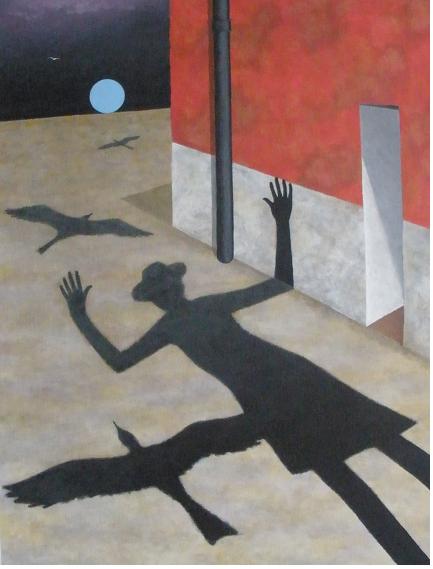 On Guyana’s forty-seventh anniversary as an independent nation, I would like to celebrate our achievements and pay tribute to a son of Guyana: Stanley Greaves. An artist, sculpture, poet, and classical guitarist, he defines himself as “a maker of things.”

Born in 1934 in a tenement yard in Georgetown, Greaves was in his thirties at the birth of our nation. He describes life in the tenement yard as a vibrant community… with its own dramas among the families that lived there. He came from a family who were good at making things. His paternal grandfather was an upholsterer and cabinet maker from Barbados. His father made their own furniture. As a young boy, Greaves made things with whatever he could find: empty matchboxes, cigarette boxes, bits of string, wire, empty boot-polish tins. (Interview with Anne Walmsley of BOMB Magazine in Winter 2004.)

In his teens, Greaves began painting and developed his art at the Working Peoples’ Art Class (1948-1961). He later trained in the United Kingdom (1963-1968) and the United States (1979-1980). During his years back home in Guyana, he served as an art teacher and spent twelve years at the University of Guyana as head of the Creative Arts Division. Then in 1987, he left to reside in Barbados.

Recognition only came after years of work. In 1994, Greaves’ triptych of paintings, There Is a Meeting Here Tonight, won a Gold Medal at the Santo Domingo Biennales of Painting. Thenceforth, his acclaim grew within the Caribbean Region and beyond.

In Horizons, two political poems remain relevant today. Written in 1976, “To Politicians” brought to mind the vision of the founding fathers of our nation in 1966 to mold One People, One Nation, One Destiny.

A vortex of language, / seductive words of power / corrupt the tongue. / But words must leap fresh / – luminous lukanani in a pool. / Words must hit the air / – cosmic vibrations / of the gallant bell-bird. / Words must secure visions.

In “Knees” (1998), Greaves expresses hope that the people will someday bring to their knees politicians who accept words dangerous to truth.

Streets will sound to marching knees / Parents will dream for their children / and all will be right, perhaps, / in that dream if not this, / where knees of a weary people / threaten petty politics.

Greaves’ art has transformed over the years. His more recent Shadow Series explore the realm of shadows that lies beyond the second and third dimensions. To learn more, you can watch his Interview with Derrice Deane of CaribNation Television in 2011.

After forty-seven years as a developing nation, Guyana remains a shadow of its true potential. Unable to come together as One People, we are afraid to walk towards the Sun with confidence to achieve Our Destiny as a great nation…for all.

4 thoughts on “On the Anniversary of Guyana’s Independence Day: A Tribute to Stanley Greaves”