As a non-union worker and mother of two school-age children, I resented bus drivers and conductors when they went on strike. Like other workers who depended on public transport to get to work and get our children to school, I had to suffer the consequences of their collective action for better wages and working conditions. What about my right to get to work?

As an import-export manager, strikes at the ports posed other hassles. When dock workers or customs officials went on strike, import and export goods sat at the port awaiting clearance or shipment. Didn’t they care that they were affecting businesses and other workers? 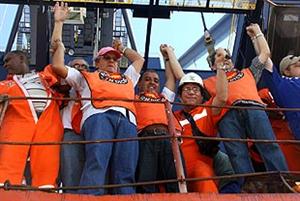 While I resented and complained about workers who went on strike, I realized how privileged they were to have a labor union defending their rights. When faced with exploitation in the workplace, the rest of us had one of two options: leave the company or suck it up. With little chance of finding another position during a recession with high unemployment rates, as was the case in the late 1990s in Brazil, there was really only one option.

At the pinnacle of Ceará Importers’ success, our warehouse workers often faced long working days unloading containers, stocking goods, and getting them out to the company’s wholesalers and retail stores.  Shipments of up to four containers were manageable. Until the day ten containers lined up along the street outside our business premises.

The Warehouse Manager stood beside me at the gate to watch the arrival of the container trucks. “It’s going to be a long night,” he told me. “No one is going home until we unload all the containers and add the goods to our stock.”

On the morning of the fourth day, a warehouse worker came to me for help. “We’ve worked three days straight with only one to two hours of sleep. We’re tired. Ask Doutor Ricardo* to let us go home early today.”

I promised to talk to Doutor Ricardo, the company’s Administrator.

“Don’t tell him I asked,” the young father of two children said. “I can’t lose my job.”

Doutor Ricardo viewed me with suspicion when I made my request. When asked, I refused to divulge the employee’s name.

“The workers are not your concern,” he told me. “Do your work and let me do mine.”

I retreated. I could not afford to lose my job. Openings in my line of work were also scarce and the competition fierce.

When business owners enjoy an excess supply of labor and their employees are afraid to refuse working extra hours for fear of losing their jobs, they have no need to hire additional staff and incur a rise in their operational costs.

Who was I to advocate fair treatment of our most vulnerable employees?  As a non-union worker, I had to concede that labor unions play a vital role in protecting the rights of workers without a voice.

4 thoughts on “Workers’ Woes in Brazil”