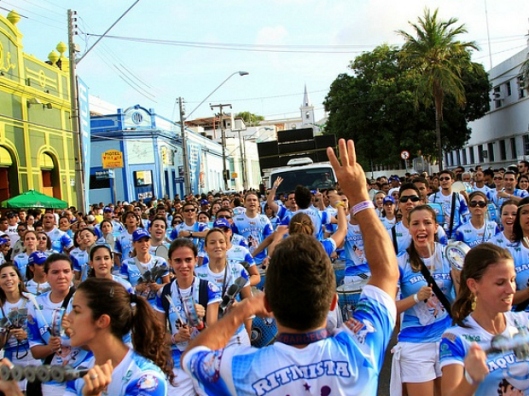 Almost everything stops during Brazil’s four-day carnival extravaganza and festivities. The most celebrated festival in Brazil takes place yearly before Ash Wednesday. For some revelers, four days are not enough. They continue partying and binging throughout Ash Wednesday and the rest of the week.

Ash Wednesday marks the beginning of the Christian forty-day Lenten Season. It is a period of fasting and penance in remembrance of the suffering and death of Jesus Christ, and culminates in Jesus’ resurrection (Easter Sunday). Carnival can therefore be considered as a kind of last indulgence in worldly pleasures before cloaking oneself in self-denial during Lent.

In the early years in Brazil, I watched the Rio Carnival broadcast live on the TV. The vibrant colors and sparkle mesmerized me. I fell in love with the samba. With lessons from my girlfriends, I learned to dance the samba… somewhat.

During carnival in Fortaleza, capital of the State of Ceará, thousands of people leave the city for the beaches and the interior, as well as for other cities across Brazil. The exodus starts on Thursday night and escalates on Friday night. To avoid the bumper-to-bumper drive along the coastal and other highways, we left the city early on Saturday morning.

For those who stay in Fortaleza and the tourists who visit the sunshine, coastal city for carnival, there is Maracatu – an Afro-Brazilian street parade in which the participants dress up like the Portuguese royal court of the Baroque period. Since most Cearense are moreno (brown-skinned), they paint their skin black. (I found this weird the first time I watched the parade.)

Aracati, 87 miles distant from Fortaleza, is one of the popular carnival destinations in Ceará. People dance through the streets behind trios elétricos – large trucks specially equipped with high-power sound systems and platforms for musical bands and singers to perform for the crowds. The favorite rhythms are forró and axé.

The year my sons and I spent carnival in Aracati, the sun was merciless. Jet streams of water sprayed the crowd, keeping body temperatures in check. Conservative and a teetotaler – a spoiler for ‘playing’ carnival – I observed the revelry from the sidelines of the crowd. Exhausted at the end of the day, I stayed with my sons at the pousada (inn) while my friends danced through the night. With the sound of the trio elétrico reverberating throughout the small town, sleep did not come easy.

After a few years, the Rio Carnival lost its allure. For me, it became a tourist attraction that thrived on debauchery. Across the nation, carnival appeared to be a pressure cooker valve for the working class: a release from the year-long pressure of living on minimum wage. People do whatever it takes to raise money to ‘play’ carnival.

2 thoughts on “Carnival in Brazil”