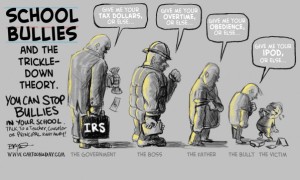 On 18 September 2011, 14-year-old Jamey Rodemeyer committed suicide. He could no longer endure the hatred unleashed on him by young bullies.  Jamey is not the only child victimized by bullies. The US National Center for Educational Statistics (www.nces.ed.gov) revealed that, during the 2008-2009 school year, 28 percent of students aged 12 to 18 reported that they were bullied in school. Most bullies favored ridicule, insults, and rumors to torment their victims.

What kind of youth drives another human being over the edge? Such a person must be filled with anger and hatred. Such a person could not know what it means to be loved or to love. Such a person lacks tolerance and compassion.

We have failed as parents and educators when our children and students treat others with contempt and take delight in their suffering. Our children are reflections of what we teach them through our words and actions, and our failure to pull them in line when they go astray.

I raised my sons alone after their father left us in Brazil to return to our native land Guyana. They were six and eight years old at the time. When my younger son was eight years old, he became the victim of bullies in the condominium where we lived. It was my responsibility to protect him from harm. I spoke with the bullies. I met with their parents.

One particular bully – a sixteen-year-old boy – was persistent. His mother was a good woman. Like me, she was doing the best she could to raise her two sons on the right path. Following the advice of the school counselor, she had enrolled my son’s tormentor in a jiu-jitsu class to learn how to channel his anger. I empathized with her struggle and predicament. But I had to make it clear to her and her son that I was prepared to take legal action to put an end to his harassment.

When we had thought that our ordeal with bullies was over, more bullies lurked in Middle School (a private school). My son was ten years old when – in the presence of the school coordinator (head teacher) – I confronted my son’s bullies: a group of four older and bigger boys.

Without help, and without being held accountable for the harm they inflict on their victims, our young bullies will continue to drive more of our children to despair and suicide.